When I volunteered to lead the service today, and to give the homily, I had no idea that the gospel reading was the story of the loaves and fishes. So many have said so much about this particular passage – what could I possibly add? So I looked at the other scriptures for inspiration, but was instead drawn back to the gospel reading. But why? What was it that kept pulling me back to it? I went back and read not only the original scripture but also the context of the passage – what came before it. Then I knew I did have a message, but from a very different point of view.

At the beginning of the 14th chapter of Matthew, Herod had arrested John the Baptist. When the daughter of Herodias danced for him he promised her whatever she wanted. Urged on by her mother, she asked for the head of John the Baptist, and Herod ordered it given to her. John’s disciples buried John’s body and sent a messenger bring news of John’s execution to Jesus.

This is where today’s reading picks up. Jesus was told the news of the death of his cousin, his friend, his brother in ministry. His heart and soul were undoubtedly in great sorrow at the news; in his humanity, Jesus was not immune to the pain of loss. His first instinct was to go away by himself, to allow him to process this raw grief – the thoughts, feelings and emotions – he carried inside. He went off across the water by boat to be alone.

Word passed among the crowd of the departure of Jesus. The people had come from all over to see, hear, and be near to Jesus. Many believed they could receive a miracle of healing from his touch. There hope was in him, and they were not ready to give up and walk away. They went around the water on foot and got there first.

Jesus might have said to them, “Go, and leave me alone to grieve.” Or maybe he could have told his disciples to send them away. Then again, he might have just never gotten off the boat. But he does none of these. He has compassion and goes among them, burying his own sorrow within himself. As the hour grows late, he still refuses to send them away, choosing instead to feed thousands of people. Finally, after all that, he does get away by himself at long last.

In this story, I found a striking similarity to my own recent experiences. When I lost my mom, all I wanted was to be alone in a quiet place. I needed to process the thoughts, feelings and emotions of my raw grief. But each time I began to do so, other things commanded my time and attention. Phone calls and notifications needed to be made, and an appointment with the funeral home had to be done. Flowers and fruit baskets were arriving every day. People who loved my mom called me just to talk, and feel nearer to her through me. Others called to make sure I was okay. Some of these calls were short, but sometimes the conversations took a little while. Even without the effort required for planning her memorial service, those first days were filled with things that needed to be done.

My sister and brother-in-law, who had come up to visit mom, found themselves dealing instead with her death. They both get rather emotional, and I found myself supporting them quite a lot. Sometimes we sat and talked, sharing memories and future plans, and sometimes we sat quietly, when they just needed not to be alone. It wasn’t until they went home, four days after mom passed, that I finally had the alone time and space I had been wanting. I was able to work through my own hurt in my own way, and come out stronger for it.

Many people have lost loved ones in these last few months, from Covid or in other ways, including three other Christ Church families. Grief hovers over us like a dark cloud, and while it is important to support each other through these difficult times, we must not forget to give those who are grieving the quiet time and space they may need.

While no one can ever know another’s grief exactly, I think I have some understanding of what Jesus must have felt upon hearing of John’s death – and I didn’t have a crowd of thousands to care for! Preparing this homily has changed my perspective on the story of the loaves and fishes. I now see this story in Matthew through new eyes, and I have a new appreciation for what Jesus did that day. 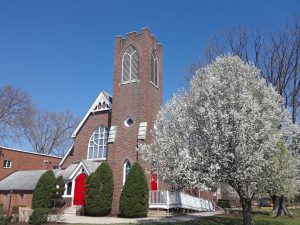